First there was Annecy (June)
10 days in France at the international animation festival!!! 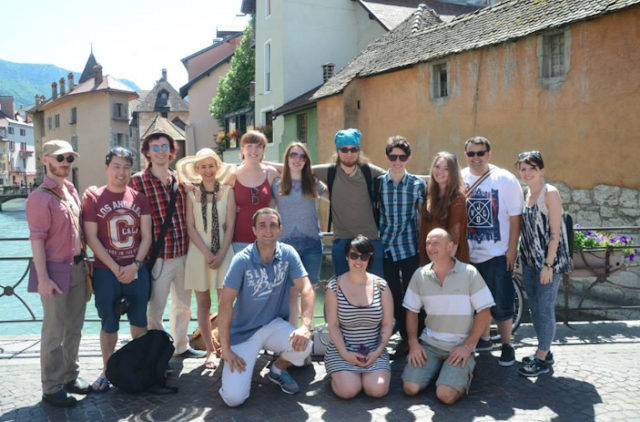 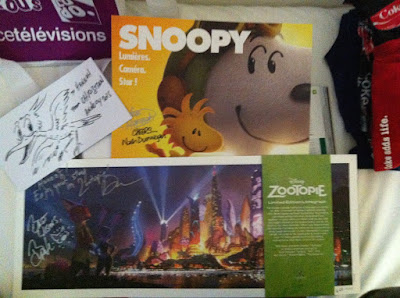 Then came graduation (7th July)
that was alright, I guess =] 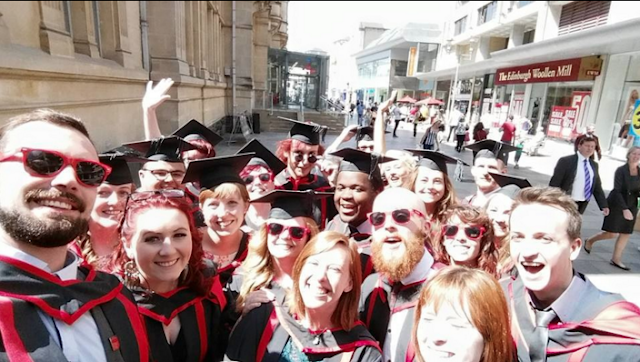 CHUCK STEEL: NIGHT OF THE TRAMPIRES

Here is the Chuck Steel short, just a hint of what sort of awesome/craziness the feature film has in store, only 18ish months till the film release (Summer 2017)

Here it finally is, my 3rd year film, which if you've read my blog before will know, I had many technical difficulties with. You can see where if I had more time I would have re-done certain shots. However, I was going for a glitchy old crackly look, to make the film look more authentic. It's a Charlie Chaplin, black and white, silent classic inspired style I was going for.

I've had to attach a link to Vimeo as for whatever reason the film does not what to upload directly to here. 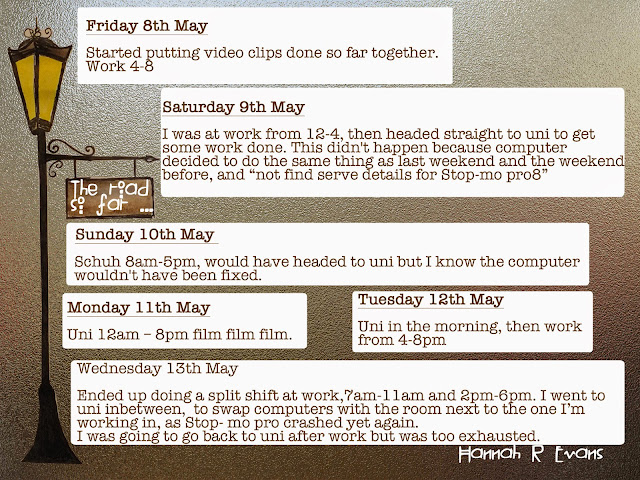 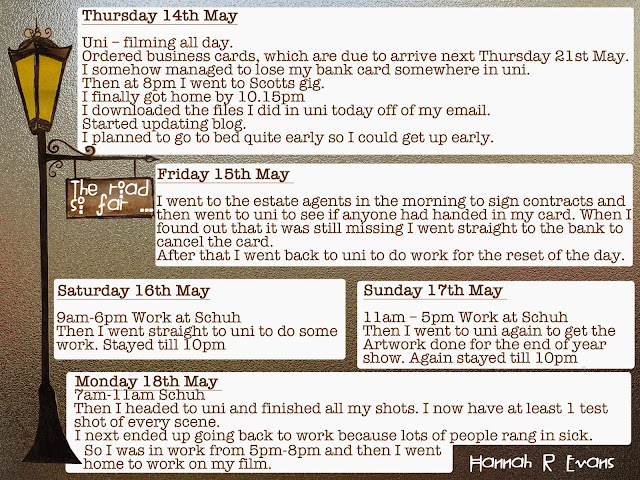 Email ThisBlogThis!Share to TwitterShare to FacebookShare to Pinterest
Labels: 3rd year After Effects

Thursday 7th May, after first submittal on Tuesday I've now had lots of feed back. All positive too!
Both tutors have looked at my work separately and they have both said they like the look of my puppets and sets.

One of them said that my work has an old classic feel to it, like an old Charlie Chaplin quirky short. Not unlike my 2nd year film. Which he had not seen the finished product, so I showed him my 2nd year film, which he liked, and said that I've got that kind of style going for me.
So even though my puppets aren't the easiest to animate, they work with the way they look. Which is good because I mentioned back in pre-production that I was going for a kind of Victorian look, with the characters clothes.

So I sent what I've done so far to the guy who has agreed to do the sound for my film, and said to him the sort of thing I'm looking for.

I'm now animation with Charlie Chaplin music on in the background of inspiration.

Some sneaky Photos from Inside the store... 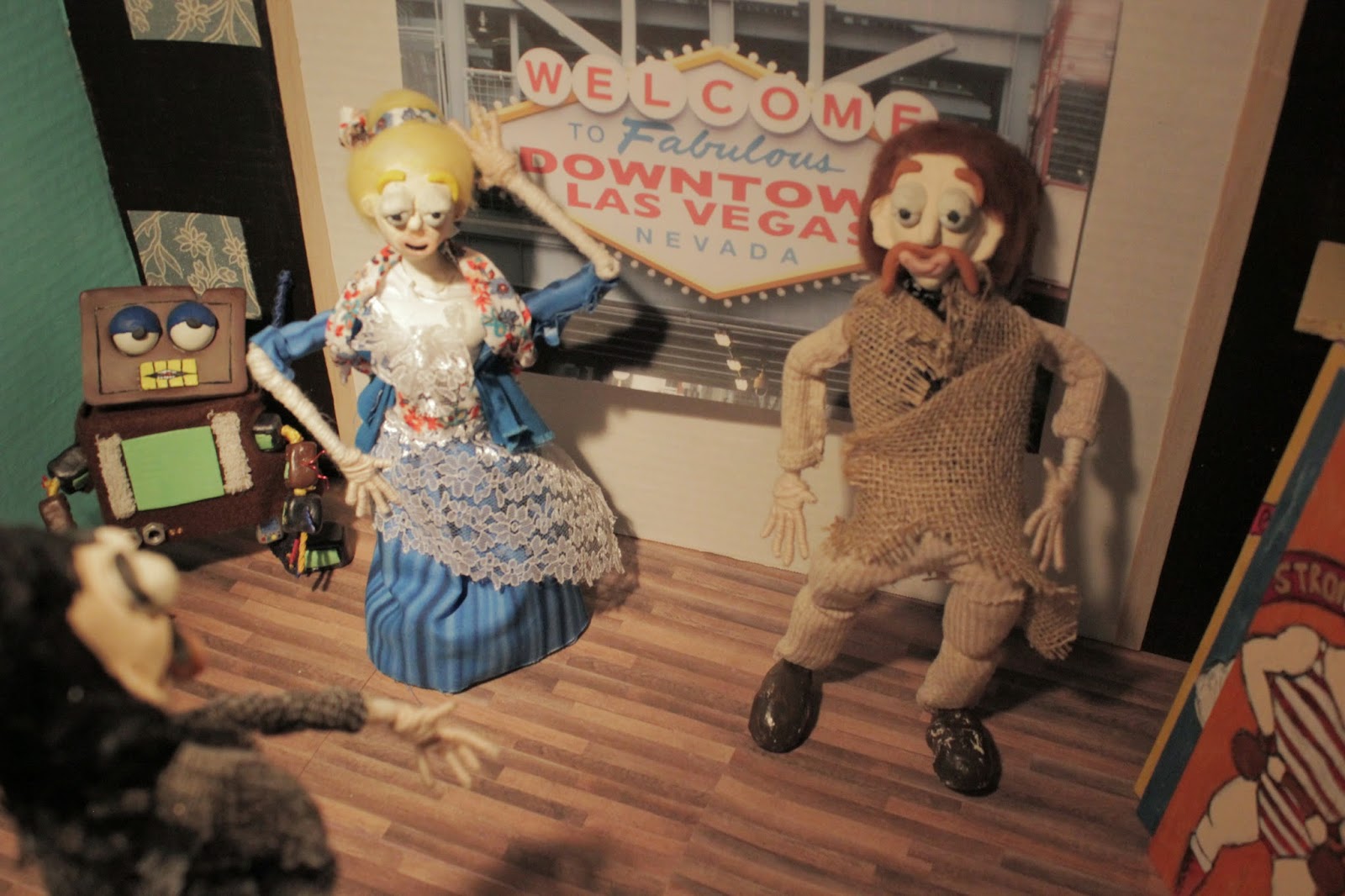 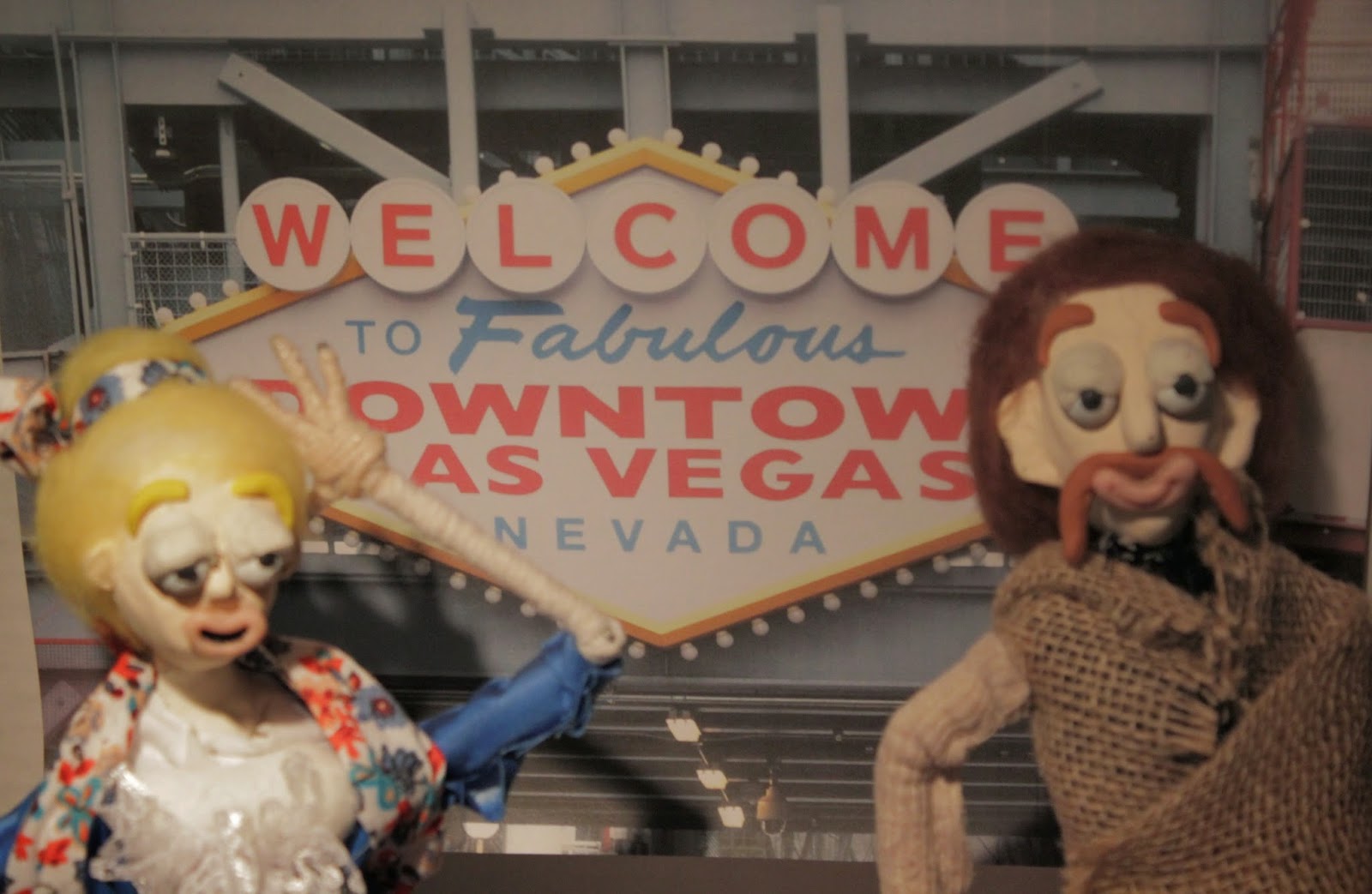 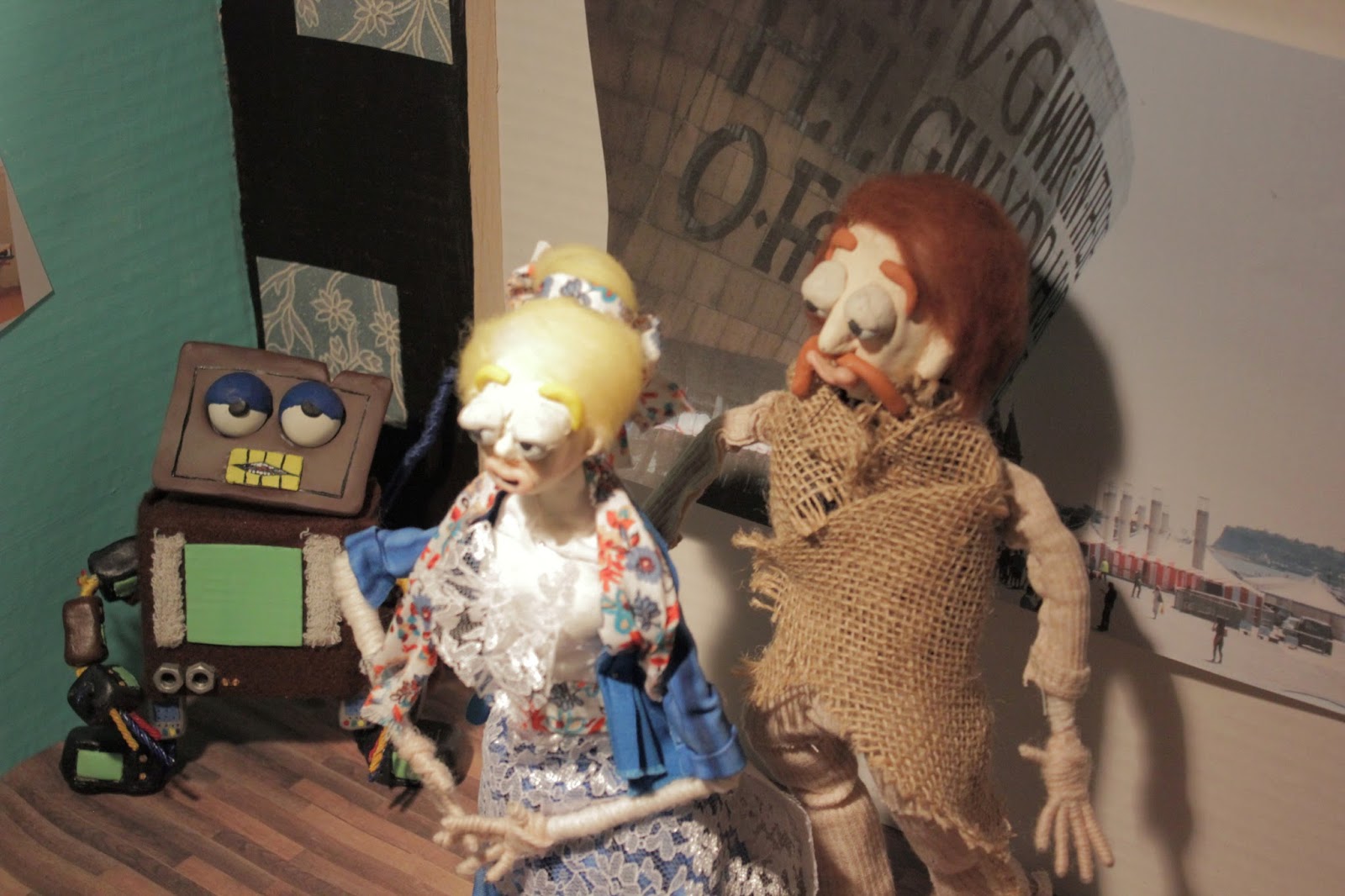 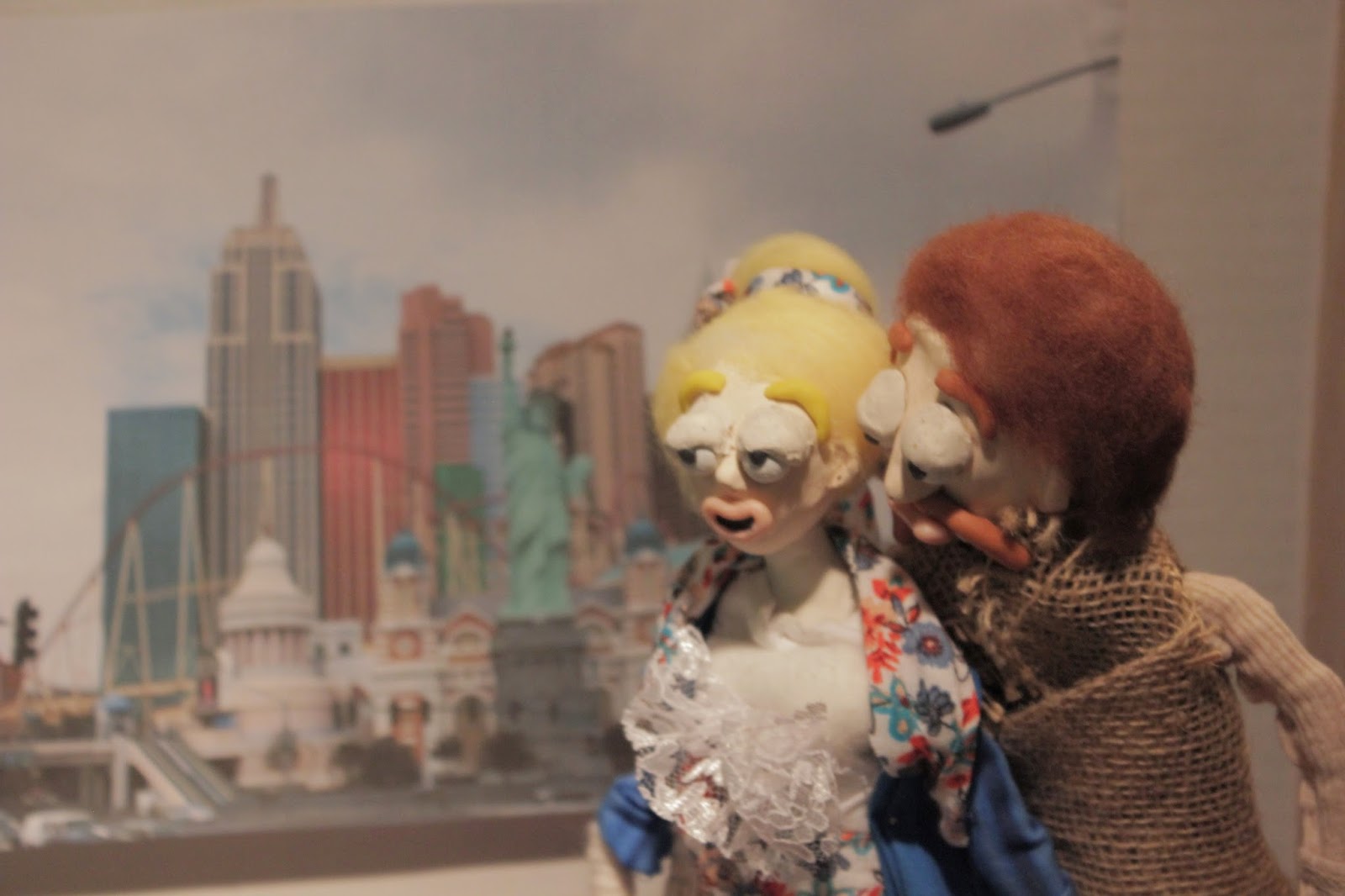 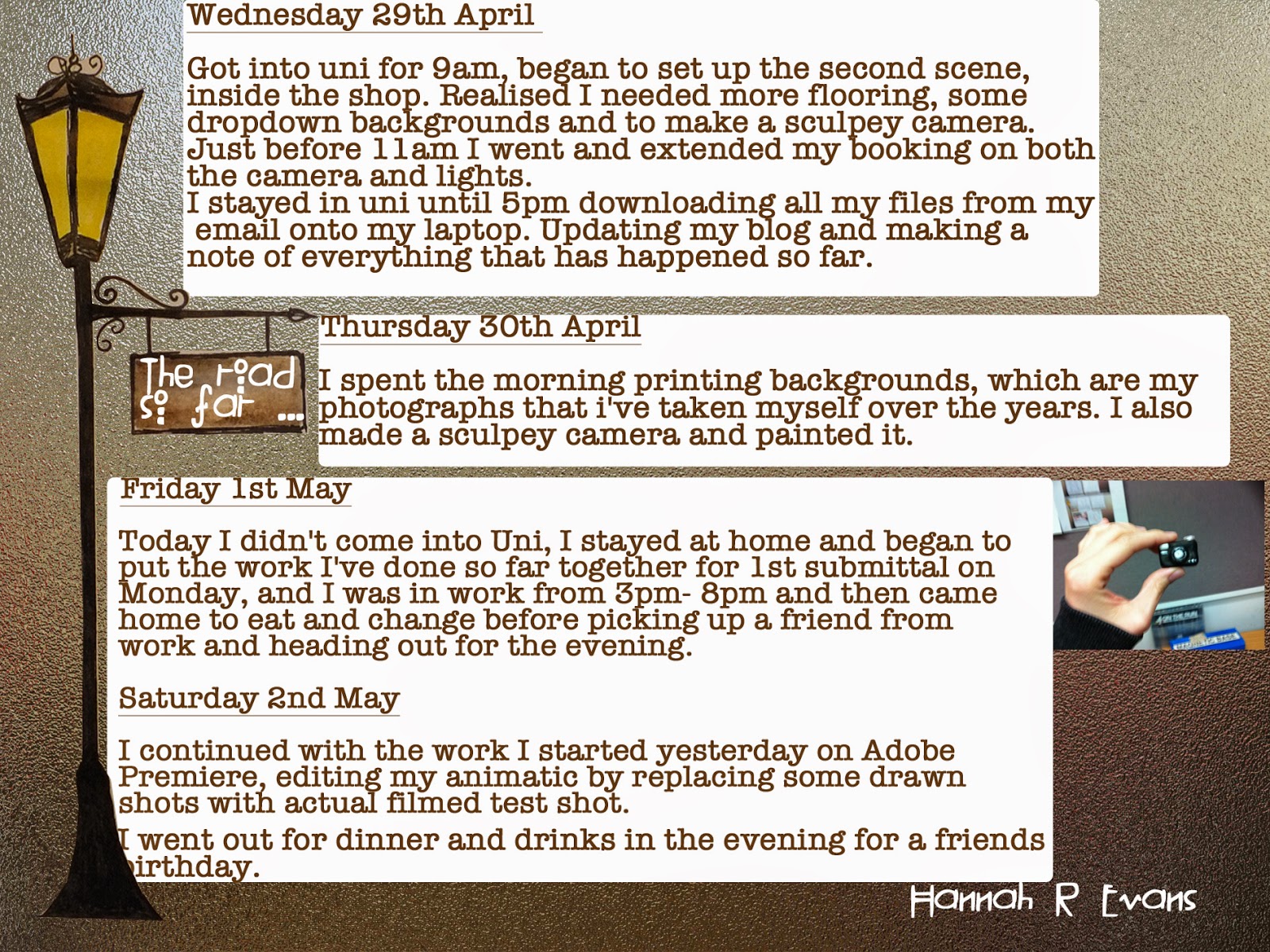 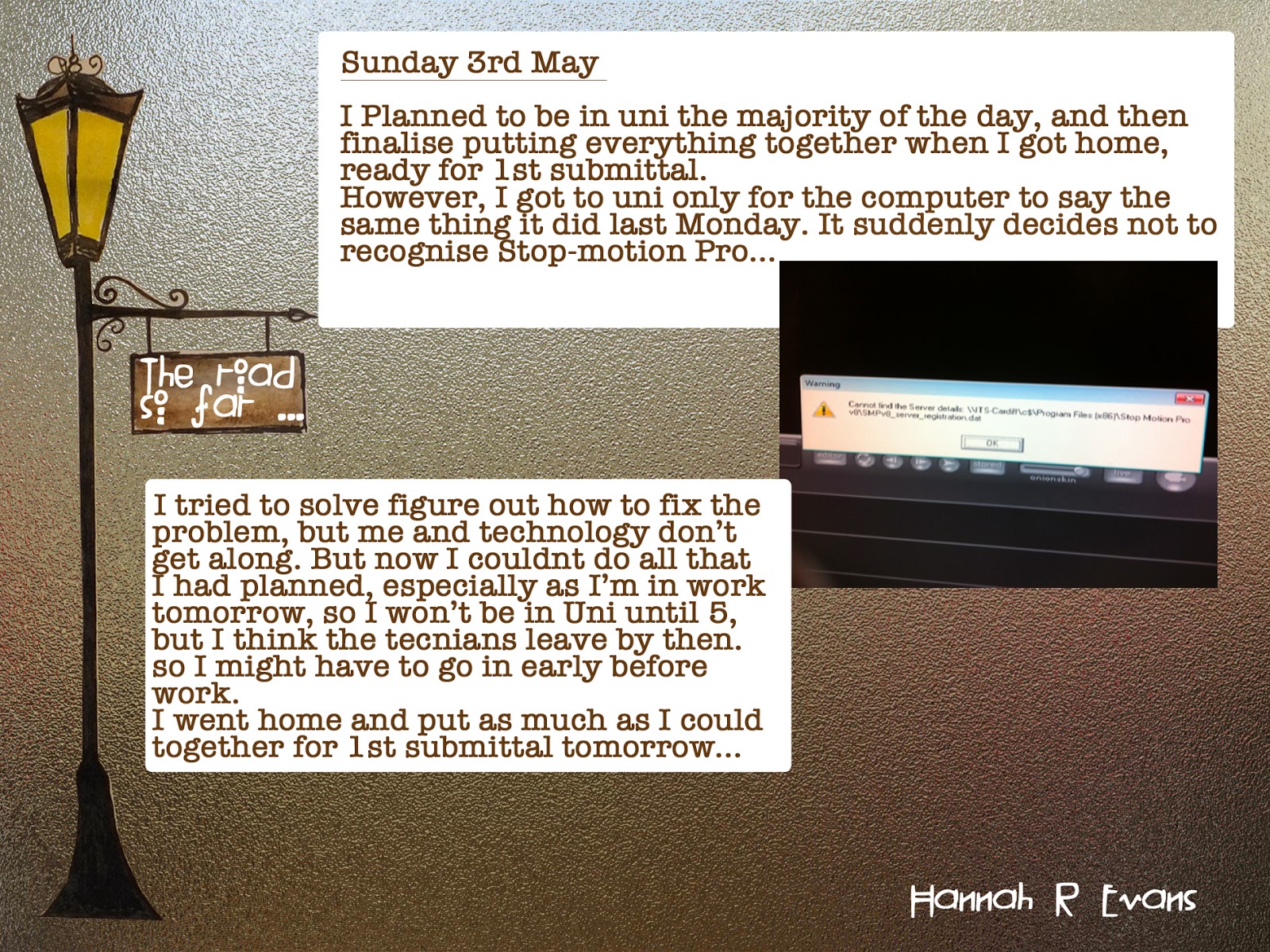 Worked 10am – 4pm, drove around picking up friends and all their band gear for a gig.
After the gig load up car with all my puppets, sets and props ready to take to uni tomorrow for filming.

Drove to uni, made 3 trips from the car to the filming room. Booked out a camera, and lights. Then went on a mission looking for two spigots to attach the lights to their stands, extension cords to link the lights to the dimmer box, and a tripod. Several hours later, everything finally set up ready to film... or so I thought. Then the software, Stop-motion pro, decides not to work with the camera. Tried different settings, re-booting the computer, camera, everything. Then went and changed the camera at the library to see if that was the problem. Nothing worked. Went to find Stan, who fixed a similar problem I had back in November, he was off ill. Finally got a different technician to come help me. He spent about an hour, uninstalling and re-installing all software, and unfortunately couldn't come up with a solution. Then I went to pester Gina, who said she would email Stan and try her best to solve the problem for me.
Pretty much had to go home, as there is nothing more I could have done today. I however, get on with so business work went I got home. 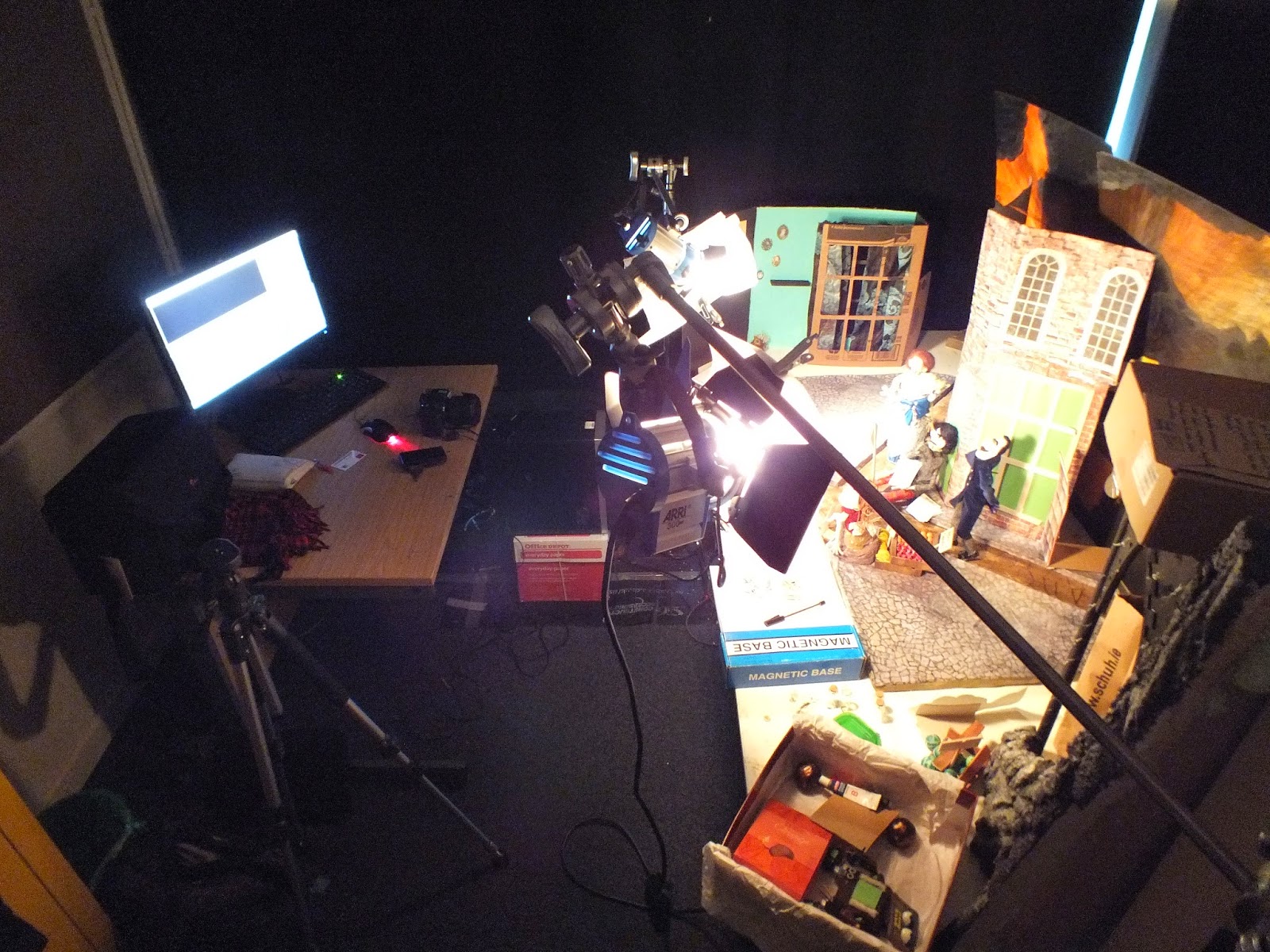 Tried rebooting the computer again, and changed the camera at the library for a second time.
Then I borrowed an older camera from a second year student to see if that would work. That worked perfectly, no problems what so ever.
So the old cameras work with the new updated software, and from what I've heard the new cameras work with the old software. However, all the computers now have the updated version of the software, and only new cameras are available to book out.
So spoke to Gina who said she's try an get hold of an older camera from a different campus for me for tomorrow. As a back up she suggested I ask Roger if he has any older cameras I could book out.
Turned out Roger did have one camera available, but would only book it out to me as a last resort as his students, photography and VFX students, get priority. So now I would have to wait until tomorrow to get anything sorted.

Gina has had no luck with getting a camera from anywhere else, but is still in contact with Stan over trying to get the new cameras to work with the new software. So I had to get the camera from Roger who has booked it out for me until Wendnesday 29th April, and said if no one else needs it then he will extend the booking.
Finally able to get filming started.
I did a few title test shot ands some test shots of the posh man and woman outside the shop. I then made a list of things I'd forgot at home and needed to print off.
Then I did business work for the rest of the day as the deadline is tomorrow.

Went into uni and handed in my business work. Then headed over to the filming room to get some work done.
Remembering the rig today I was able to do a shot of scene 1 shots 2 and 3, where the posh couple look and the shop, then each other and agree to go inside. I did these shots twice.
Then I grabbed some food before headed to work from 4pm- 8pm. I decided not to go back to uni afterwards because I need to print some signs off for outside the shop because I didn't like the ones I'd hand write.

I went into uni to re-do the shop signs and then film the opening title shot again and the sign that the couple read and then chose to go inside shop.
Then I had to head of to work again from 3pm – 8pm.

Today I was in work all day from 8am – 5pm, and I was going to come to uni after work, but I changed my mind because I had to be back in work for 7am and was planning to go straight to uni after till as late as possible, but I also had to ring my parents who I hadn't spoken to in about 7 weeks.

I was in work today from 7am – 12 noon. Then I went straight into uni to get on with my work. However, Stop-motion pro decided not to work today and to make my day even better the computer decided to wipe everything I had done on Thursday, Friday and Saturday!
After a bit of a melt down, I hunted down a technician who managed to fix stop-motion prop but unfortunately was unable to re-cover my work. The only reason I didn't back to up to my external hard-drive was that the computer wouldn't recognise it, so I new I had to get my work backed up soon just in case, but sadly the computer decided to erase every of mine before I had a chance to fix that problem. It was just my work it got rid of though, because the student who was using that computer and software before me, his work was still on there.
I am noteing all of this down, not to complain but to explain all of the obstacles I am coming across, to prove that I am trying to do my work. The last thing I would want is for any of the tutors to think I was just being lazy and not doing anything.
I had a bit of a panic that I'd end up graduating with a really low mark so I went to find one of my tutors to discuss this. She explain the making scheme to me and reasured me I had nothing to worry about but not to give up, and just do the best that I can.

I went back to my little filming room and shot 2 test shots of my policeman's walk cycle. I did 2 shots of the policeman doing a turnaround, because I feel that my film is likely to turn into a showreel/trailer for a film. So I was thinking I could show turnarounds of each character with descriptions of their personality next to them with background music that reflects their personality.
With short animated clips from the film. A bit like what Joshua and Nathan Flynn showed of their final 3rd year film, even though they didn't get to actually finish the whole film itself.

I also shot my posh male character turnaround and shots of him with different replaceable mouths.

To solve the problem of the external hard-drive not working, I borrowed a different one from Gina, unfortunately the computer won't recognised hers either. The only way I could think around this rather than have to go find someone else to help me, I have decided to email of my own work to myself. So now everytime I do a shot I export it as a video and as individual frames and attach them to an email from my university account and send them to my hotmail account.

Now that I have the character turnarounds done, I figured I better start filming all my shots. I'm going to try and get as much done as possible, and then IF I have time after, I may go back and re-do some shots and improve them. Though I am finding already that my puppets my look better than my puppets from last year, but they still aren't easy to animate.
These shot I did today as well : 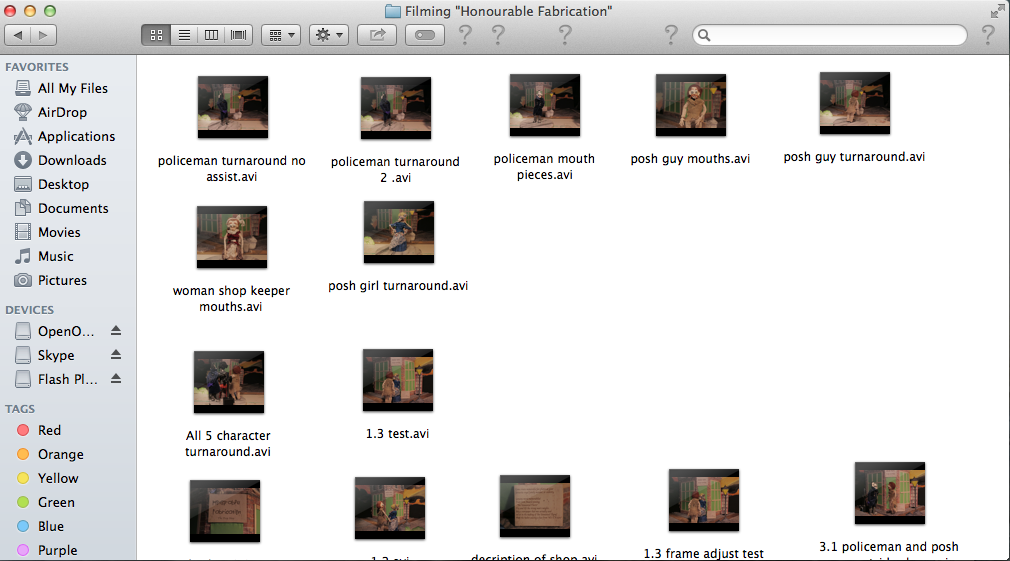 In uni by 9am, brought flooring for scene 2, inside the shop. Also brought in my own tripod, because I the I'm using is a bit wobbly at the top, and I like to animate camera moves but obviously if your moving the camera you need a stable tripod.
I saw Roger before 11am to see if I could extend my booking on the camera, which I was able to yay! Finally things are going right.
I am currently downloading all the files I've sent to myself and am going to put them in my animatic and send it to the lovely guy who has agreed to do the sound for me, and tell him whats been going and what my new plan is.


I am also setting up my second scene, which is the interior of the shop and am going to get some test shots of that done today.